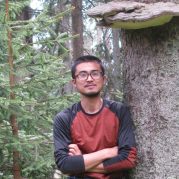 Dr. Fukusawa was a visiting scientist from Tohoku University Japan, funded by the Japan Society for Promotion of Science (JSPS). His research interests are on the diversity and ecological functions of wood decay fungal communities, their driving factors and their interactions with other organisms on dead wood. He has worked on the theme of dead wood in beech, oak, pine and spruce in Japan through field work, laboratory incubation and molecular experiments. Fukusawa is  interested in variety of organisms such as tree seedlings, bryophytes, myxomycetes and invertebrates interacting with wood decay fungi.

His project at Cardiff was aimed at finding the mechanisms of fungal community development in deadwood particularly focusing on the factors determining relative dominance of white-rot fungi and brown-rot fungi. Since the difference of these decay types strongly affects the physicochemical properties of decayed wood, it has very important ecological impacts on biodiversity and the decay process of dead wood, and consequently on the forest ecosystem. It was particularly focusing on the effects of wood decay type on spruce seedling establishment on dead wood because dead wood is a very important seedbed for spruce, which is one of the most dominant tree species in northern hemisphere. By using a combination of incubation experiments of isolates of various fungal species and field work along latitudinal gradient among European countries, the aim was to find a pattern of fungal community, wood decay and spruce seedling regeneration on dead wood.